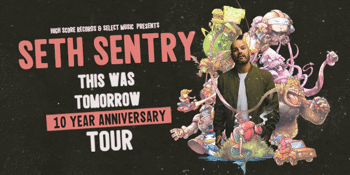 The Prince Of Wales Hotel (Bunbury, WA)
Thursday, 22 September 2022 8:00 pm
38 days away
18 Plus
Rap
Hip Hop
Australian Artists
Music
Send this event to
Has it really been 10 years since Seth Sentry dropped the genre-defining, ARIA Gold album This Was Tomorrow?

Yes, it really has!

And while that news might make you feel old, the album itself is still as fresh as it was on September 14 2012, when it introduced the world to one of the greatest Emcees Australia has ever known.

Over the course of the last decade, which has seemingly passed in the blink of an eye, This Was Tomorrow has lost neither its impact nor its relevance... particularly for those of us still waiting patiently for a goddamn hoverboard.

Now to celebrate this milestone, Seth is taking his band, as well as his Twitch streaming universe on tour around the country this September. Playing old and new faves, plus a host of special tunes from This Was Tomorrow.